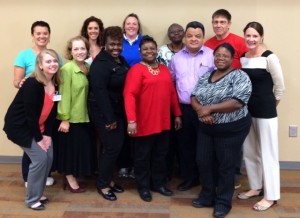 Get Healthy, Live Well launched the Diabetes Prevention Program to help people in west Georgia avoid getting diabetes. The results have been dramatic so far.

The program, which began in January, has seven classes meeting for one hour each week in a variety of locations across Carroll, Haralson and Heard counties. As of May 1, the program’s initial 70 participants had already lost a total of 529 pounds and are continuing to consistently lose weight each week.

Due to the success of the first classes, Tanner recently trained a second group of certified Diabetes Prevention lifestyle educators who are gearing up to launch a new series of classes in early summer. Tanner has trained a total of 29 lifestyle coaches in the past six months.

The Diabetes Prevention Program class meets weekly for 16 weeks and then monthly for six to eight months. A new series of classes will begin in summer 2014. Class schedules will be announced in early June. To place your name on the pre-registration list, call 770.214.CARE. Read more here.