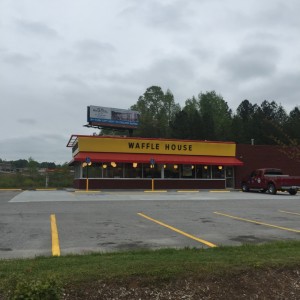 Last week we received several tips that the Bremen Waffle House had temporarily closed. There was a wide range of speculation as to what caused the closure of the location at 1980 Alabama Avenue, along US Highway 27. On Thursday, April 7, the restaurant re-opened after construction was completed on their parking lot. This work primarily served to make the lot more accessible for disabled patrons. Originally, disabled parking was on the side of the building facing the highway and lacked space for vehicles with passengers in wheelchairs. Since then, disabled parking has been moved to the front of the building next to the entrance and appropriate space has been added for the previously mentioned vehicles. The entire parking lot was also restriped and spaces overall were made wider.

RUMOR BUSTER: At no point was the closure of the restaurant due to a failing health score. In fact, according to the state department of public health’s restaurant inspections database, on the last routine inspection completed in December 2015, the restaurant scored a 96.

Back on His Paws UWG Faculty and Staff, Community Members Resurrect ‘Spirit Wolf’

The City Menus is a menu of local business news in the West Georgia region.
Contact us: [email protected]
© 2011-2020 The City Menus, LLC All Rights Reserved
X
X