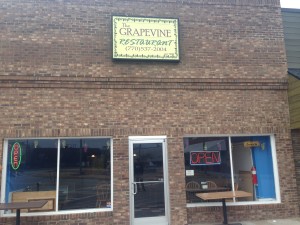 We visited Bremen this week to see what has changed. The journey started around the Walmart Shopping Center where we noticed Just Games had closed. A for lease sign appeared to be turned the other direction inside the location. Also some interior construction looked to be taking place inside. At this time we do not have any additional details on what it might become. Our next stop was to check and see if the former Fluffy’s had been leased yet. As you can tell by the picture, yes it has. The Grapevine Restaurant opened in December of last year at 114 Buchanan Street in Downtown Bremen. Also a new hardware supplies store has opened in the former Southern Home and Ranch called Wallace Building Center. We featured them in a story a few months ago. You can access that by clicking here. The employees were very inviting as they let us take a few pictures of the building inside and out. We also noticed some other store closures, Bianca’s Boutique had closed on the westside of Downtown. Also Faith Trust and Pixie Dust is moving to Downtown Bremen very soon! Their former location at 1021 Alabama is closed. The new location appears to be next to the dog grooming place off Tallapoosa Street.