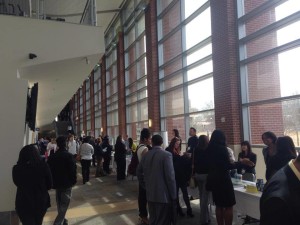 One of my favorite times of the year in our community is UWG’s Media Day! On Wednesday, March 5th The University of West Georgia hosted several radio stations and mass communication companies in the Campus Center. This is such a great opportunity to talk with people in the field of mass communications. Personally my career in mass communications started with a simple internship at WSTR Star 94 Atlanta with Darik at night while attending the Art Institute of Atlanta. This internship brought me closer into the radio industry. From there I went onto Gradick Communications in Carrollton where I was in charge of social media, website, and on air news. Being local was very important to me and starting out in a smaller market. By doing this it gave me a better understanding how the industry worked. From there I went to Clear Channel Communications as a traffic reporter and then to WSB radio. With using everything I was taught in college and different areas of radio I was able to create a website called The Carrollton Menu. In typing this short summary of what I’ve been through I just want to encourage anyone looking into the mass communications fields that anything is possible within in this wide field. During Media Day students were able to speak one on one with people actually in this career field and really get a better understanding of what it is like after college. Several possible employers offered internships and a visual look into what the student could do for them. Companies like, WSB-TV, Star 94, Disney Radio, WABE, Gradick Communications, CNN, and others were all on hand to field questions. Thanks to the University and the Mass Comm department for putting on such a successful event.  – Jonathan Dockery