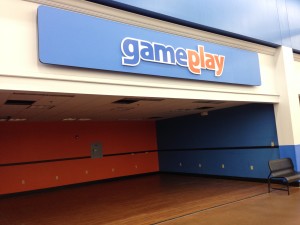 A few days ago we watched as crews removed the arcade equipment from the GamePlay inside Carrollton’s Walmart Supercenter. Over the course of a few weeks we have been in close contact with the media relations director of Walmart. She mentioned to us that a Medical Clinic was coming to the Carrollton location. However she could not confirm where it would be going in the Walmart Supercenter. Two empty spots are now available, a Portrait Studio and now GamePlay. The former GamePlay section looks big enough to support a medical clinic. A Facebook fan of The Carrollton Menu reports that an associate of Walmart confirmed with her that the clinic would go into the former GamePlay space and GamePlay would move to the Portrait Studio. Construction of the new clinic is expected to take place during mid July, per open construction records. We will continue to monitor the construction and let you know.

Check this out below from our Facebook fan Jill