The entire community is currently embracing the Haney Family right now after a tragic plane crash killed, Mr. Richard Haney and his grandson.  The family spokesperson Mr. Rooks stated today at a press conference that the grandson shared a love of flight with Richard. Mr. Haney was enjoying his hobby on a late Sunday afternoon when the unthinkable happened. The Carrollton Menu first received word around 5pm that a small plane had crashed in the woods near the Laurel Lakes Subdivision. Atlanta media soon reported the same information a little bit later. Due to the amount of community presence at the scene we decided to stay put at our offices to gather more information. As the night drew to an end we soon realized who was in the plane. As a community website our focus is at the heart of the community. Richard Haney was that true heart of the community. For years he owned Richard Haney Ford off Bankhead Hwy in Carrollton. Many of you have purchased vehicles from him and enjoyed conversations with him. On April 28th, 2010 Pugmire bought the dealership. Mr. Haney was very involved in the community. He served on the Salvation Army Advisory Board here locally. People who were close to him call him a “Great Community leader and a Philanthropist.” We mourn the loss with all of you. Our continued prayers are with the families and friends that you find peace and comfort in this time of greatest need. 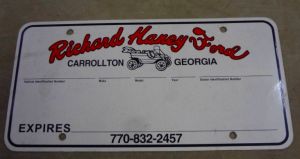