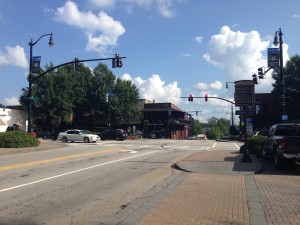 The City of Carrollton is working closely alongside with URS Corporation to find impactful solutions for traffic issues around The Square. URS Corporation is a leading provider of engineering, construction, and technical services for public agencies and private sector companies around the world. During a presentation to the City on Wednesday, July 23rd URS discussed several City Squares around the country that were like Carrollton. Adamson Square currently has 56 parking spaces. A few other cities that were compared included several cities in PA including, Hanover which has 35 spaces, Gettysburg which has 34 spaces. A Master Plan will include traffic calming studies, pedestrian access, and greenspace. A landscaping architect would create a planed experience that would keep the pedestrians safe. One of the most recent projects that URS undertook was Emory Village near the CDC in Atlanta. Further discussions laid out a possible plan for bricks instead of pavement. This would improve the motorists behavior and cause them to slow down so they are more aware. Also a refuge island was discussed which divides traffic. One of the alternative suggestions would remove the stoplights at Adamson Square. You can see that plan below. 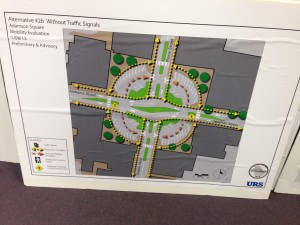 This alternative #2b traffic plan was featured as the most welcoming. As you can see their would be landscaping ( Refuge Islands ) splitting lanes on Alabama Street and Newnan Street. This would provide a safer environment for pedestrians. You can click on the picture above to see more detail. Bricks were also recommended to cause vehicular traffic to slow down due to the rumbling. Below is a picture of bricked streets in Annapolis, Maryland. Let us know your thoughts on our Facebook page under the original post! We are excited to see what transpires for Adamson Square in the future. Note : This is just a primary discussion. Nothing has been set in stone. A work session meeting took place under public knowledge at City Hall on Wednesday, July 23rd, 2014.