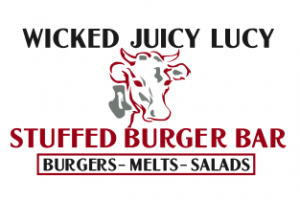 Update 9/24 : Just caught a glimpse of Wicked Juicy Lucy’s menu while at Club Fitness. Haha. Soon you can have fun creating your own Stuffed Burger along with Hotdogs! The burgers start from $5.99 and up! You can build your own melt for $4.99. Also salads will be available and something called a Smoonie! This is a smore and moon pie combination. Everything looks super yummy. Juicy Lucy Stuffed Burger Bar will open soon in the new West GA Village behind McDonald’s off Maple Street at 120 Cunningham Drive!

Wicked Juicy Lucy Stuffed Burger Bar will be opening in West Georgia Village sometime in August of this year. The restaurant is a national franchise expanding in the Southeast. According to the developer of West Georgia Village, the owners are opening in Midtown and Buckhead. Just announced this week, Hard Bean Coffee will also open a location in this same center near UWG.

Anchored by several shops & eateries, it is a convenient shopping area for 13,000 students, staff and faculty, as well as the Carrollton community.

Once completed and fully occupied, the project will generate $3.3 million in annual retail sales, and will employ 29 new jobs for Carrollton. The developer has worked on leasing and development of several Georgia marquee projects, including Mercer Village, Jekyll Island Village, Underground Atlanta, to name a few.