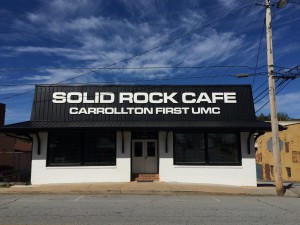 Last week I was invited to tour the newly renovated Solid Rock Cafe by youth pastor Ryan Shostak. The building sits at the corner of City Hall Avenue and John Wesley Plaza. Several years ago this particular building was home to a gas company’s payment center. The deposit box still remains on the side of the entrance to the building. According to Dorothy at Horton’s Bookstore, this was also home to a hardware store and a sports store many many years ago. Over the past month Carrollton First United Methodist Church has completely renovated the building. They added a more comfortable environment for the students of the church. I can remember several years ago attending a few concerts that were hosted at the Solid Rock Cafe. The youth building now features a student check in lobby along with Ryan’s new office which finally has a window! The inside now smells of fresh paint along with beautiful floors. The stage now allows the worship leader to face the center audience rather then the side. A new kitchen was added along with wooden side wall seats and new tables. Making the way downstairs to what was a dungeon now features several additional classrooms with bright and welcoming seating. The Sunday School environment now feels like you are in a living room rather than a classroom. I can remember video game stations downstairs which are no longer there now. Some additional game tables have been added along with a T-shirt wall. The T-shirt wall features past events that happened during the existence of Carrollton First United Methodist Church’s youth group. Additionally a small library for students was added downstairs near this area. Thank you Ryan for letting us feature these renovations on our website and allowing us to tour the newly renovated Solid Rock Cafe.

CareTrack Recognized as One of Atlanta’s Fastest-Growing Private Companies