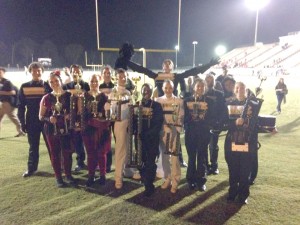 CARROLLTON, GA – The Carrollton High School Trojan Marching Band continued its rich tradition of garnering superior ratings in all captions at its first competition of the season held this past Saturday in Rockmart, ultimately claiming a runner-up finish in all classifications.

Competing in class AAAA at the Yellow Jacket Classic Marching Competition hosted by Rockmart High School, CHS Band Director said the students “performed with passion and fervor that was received by a boisterous standing ovation by the crowd!” In addition to receiving top awards in all captions, the band also claimed first place in Drum Major, first place in Colorguard and first place in Percussion. The band’s performance earned a second place finish overall, no small feat considering this award is determined by comparing scores from all bands in the competition, regardless of band size. One judge even remarked that Carrollton’s band was clearly the “fan favorite.”

The City Menus is a menu of local business news in the West Georgia region.
Contact us: in[email protected]
© 2011-2021 The City Menus, All Rights Reserved
X
X