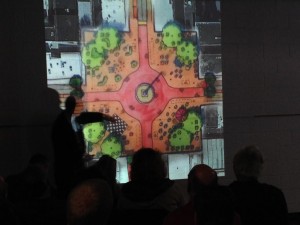 Previously during the Summer, URS Corporation discussed several possible re-workings of Adamson Square. Today another group named Tool Design was on hand to give everyone an update on a proposal they came up with. This proposal was based upon numerous factors including traffic volume, walkability, speed, programming, quality of life, and economic development. Ian Lockwood of Tool Design showed many diagrams throughout the presentation along with cities where these designs were working. He spoke about shared spaces and walkability helping Adamson Square become a destination. The image above shows the new proposed idea for Adamson Square. The streets would become a round-a-bout and allow traffic to flow freely instead of stop. Each quad would have an area that would provide a safe place for pedestrians to walk. Bikers would have easy access from other areas into the Square. Emergency parking would be added along with a few handicap spaces. The regular parking on The Square would be eliminated in this proposal. Officials answered several questions in regards to this from merchants. One of the responses came from City Manager Casey Coleman who stated that the new park being built by the Courthouse would allow people to easily access the Square area from the Courthouse Parking Deck. Other roads within this area would help funnel traffic away from the Square to other parking areas. A map featuring the roads around The Square had a few networked to come out in different areas. For example Minden Place which is next to Dairy Queen would help take traffic off Hwy 27 to avoid Maple Street. This street comes into Bradley Street. Another proposed round-a-bout was mentioned for Cedar Street at Bankhead. We stress that these are just proposals and nothing is concrete at this time.  The city will be hearing from citizens over the next few weeks and months to get their take on all these proposals. We will continue to keep you updated.