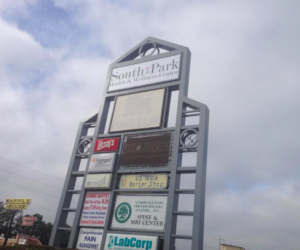 The West Georgia Shopping Center made a major change with the sign off Highway 27 in Carrollton. The center was renamed to South Park Health and Wellness Center. On July 2nd, 2012 we first informed you about some changes that were underway at the center. Linco Properties informed us in 2012 that the center would be West Georgia’s first Medical Mall. The center would feature many medical practices just like we now see 2 years later. In addition to the medical practices a new Fitness Center, Atlanta Fitness is scheduled to open in January of 2015. Just this week equipment was being moved into this state of an art facility. We also spoke with someone close to Linco who informed us of another new tenant possibly moving in very soon. A follow up call was not returned before the time of this release. More details will be released in the coming days!