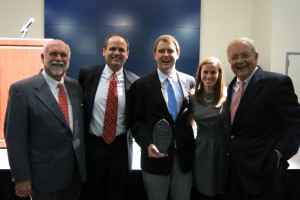 CARROLLTON, GA – The Carroll County Chamber of Commerce celebrates its 60th anniversary this year and will mark this milestone by presenting a series of awards to recognize outstanding leadership within the community and the Chamber.
It was fitting that the first of these “Legacy of Leadership” awards was presented at the Chamber’s annual dinner to honor the late Woodfin Cole, first president of the Carrollton Chamber of Commerce, now the Carroll County Chamber.
Presenting the award was Ben Butler, 2015 Chamber Chair. “…..,” said Butler.
Cole, who died in 1991 at the age of 72, indeed left a legacy of leadership throughout Carroll County. His business career began in 1946 when he started to work for his uncle at Carroll Realty and Insurance following a tour of duty in the Army. He then purchased the company in 1957, which he ran successfully for more than 30 years when he sold it in 1989 to his sons Eddie and Woody Cole, Larry Deese and Jim Russell.
Cole oversaw the renovation of the old Carrollton Clinic, built in 1897, which has housed the company since 1989.
He was the co-founder of Carrollton State Bank which merged with CB&T in 1987. He was an active member of the Carrollton Lions Club for more than 50 years. Cole’s contributions to the community included donating the baseball complex at Carrollton High School and the baseball field at the University of West Georgia.
In a feature article in the Times-Georgian in 1989, Cole was quoted as saying, “If I have a vision, it’s to make Carrollton a better place to live. I feel like you have to put something back from where you’ve been richly rewarded and that’s what I’m trying to do.”
Cole married Marion “Queenie” Cole in 1942 after they met on the campus of then West Georgia College where they were both students. According to son Eddie Cole, his father was most proud of his four children (Eddie, Woody, Connie and Carol) and his eight grandchildren. Grandson Woody, who is the fourth generation to work with the company, accepted the Chamber’s award in honor of his grandfather.