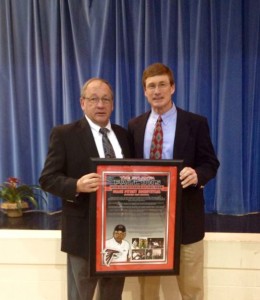 (Carrollton, Ga. – February 16, 2015) On Tuesday, February 3, 2015, the Georgia Athletic Coaches Association in conjunction with the Atlanta Falcons recognized all state football coaches who either won their Region Championship or were State Champions. Out of that group, Bowdon High School Coach Hochstetler was chosen by the GACA and the Atlanta Falcons as the Georgia High School Coach of the Year.