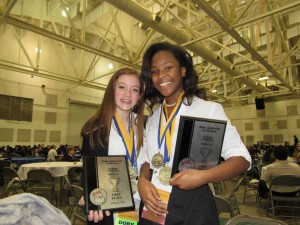 At the conference, the members were divided into three groups: Future, Business, and Leader. They traveled with this group throughout the day to leadership workshops including Leadership: MISSION IMPOSSIBLE, Leadership Olympics, and You vs. the Clock Time Management. After lunch, members participated in the exciting Awards of Excellence Program. At the Awards of Excellence program, the top ten in each event was called to stage. Winners were announced beginning with tenth place until they reached first place. With over 1,000 Georgia Middle Level FBLA delegates from approximately 82 middle schools across the state in attendance, the VRMS FBLA Chapter brought home two state champions. The team of Taylor Haney and Takyra Johnson placed f​irst​in the desktop publishing event. These two young ladies actually received three awards; a medal for placing in the top ten in Georgia, a plaque for placing in the top five in Georgia, and a medal from the National FBLA office for placing in the top two.

All members of the VRMS Chapter of FBLA are currently working on their Middle Level Achievement Program (MAP). MAP is an individual national member program designed to reward those FBLA-Middle Level members who excel in their participation in a variety of activities in the areas of service, education, and progress. The members who complete the national MAP award will receive

a pin and certificate during Honors Day at VRMS in May.