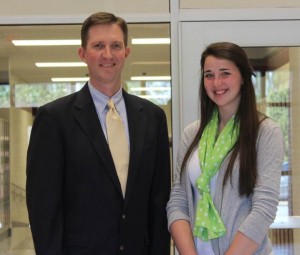 (March 30, 2015, Carrollton, Georgia) Anya Hope Dunn was selected as the Georgia winner of the National Federation of State High School Associations (NFHS) Heart of the Arts award for 2014-2015.

The Heart of the Arts award was developed in 2013 as a way to recognize individuals who exemplify the positive ideals of performing arts that are the core mission of education-based participation in art activities. Students, coaches, administrators, and other individuals associated with a school’s performing arts programs are all eligible for the honor, which generally recognizes individuals who have overcome adversity or gone above and beyond their peers.

Anya’s qualifications include holding a 4.1429 grade point average; which earned her the highest GPA award for her class. She has been a Governor’s Honors Program nominee in math and science and currently serves as an officer and section leader in the Central High School band. She participates in symphonic band as the principal chair as well as being part of the District Honor Band. Anya serves as treasurer of her sophomore class and is an active member of Beta Club, Key Club, and Future Business Leaders of America (FBLA). She is a member of the Central High School tennis team and currently has perfect attendance in high school. Anya was nominated for this prestigious award by the Central High School Director of Bands, Mr. Neil Ruby.

The Georgia High School Association (GHSA) chooses one nominee to represent the state each year. Anya Dunn is considered a champion of the arts and of her community. She will now represent Georgia in competition for the District 3 award. The NFHS will recognize eight (8) district winners as well as one eventual national winner.