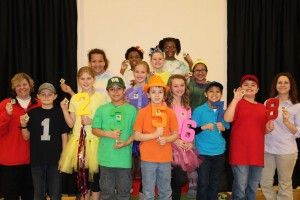 (Carrollton,Ga.-April14,2015) V​illaRica Elementary School hosted a ​We Are One Assembly​to promote kindness and prevent bullying. As part of their character education program, 5th Grade Quest students assembled a No Place for Hate Team to perform a dramatic interpretation of Kathryn Otoshi’s book, “O​ne,”​under the direction of School Counselor, Carly Byers, and Gifted Teacher, Angelique Kauffman.

This student production won Grand Prize in the Elementary School Media Category of the Anti-Defamation League’s No Place For Hate: Imagine a World Without Hate Contest. There were over 700 entries representing schools from across the Southeast Region. These students have been asked to perform once again at the awards ceremony at the Kennesaw State University Museum for History and Holocaust Education on April 26, 2015.