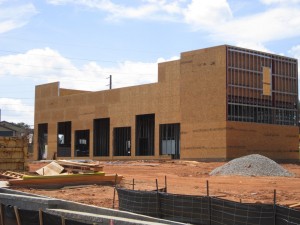 (8/4) Parking Lot paving has begun, the production date of 8/5 seems to be a little quick. Will have an updated date soon.

(6/22) Spoke with Robert at the Cook-Out in Rome, GA who tells us that Cook-Out in Carrollton is aiming for an August 5th production opening date. This is a rough date. We will update this again in a few more weeks. 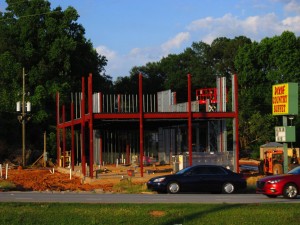 ( 6/8 ) The construction for Cook-Out seems to be coming along quite nicely. We recently spoke to the Martha Berry Hwy store in Rome, GA which informs us that this particular location in Carrollton is about 90 days away from opening. The Carrollton Menu first reported the Cook-Out coming in a story last September. Lately many questions have come in over social media about the construction of this building. You can read the original story that was posted below.

North Carolina-based Cook-Out has inked a deal to open in the former Dixie Country Buffet, adjacent to Burger King on South Park Street. The new Cook-Out will likely have both indoor and limited outdoor eating as well as a Drive-Thru.

If all goes well, demolition of the existing building could commence soon and the new Cook-Out could open by 2015. Cook-Out offers a variety of economically priced burgers and sandwiches as well as a TON of milkshake options.

Cook-Out entered Georgia last year with a location in Statesboro near Georgia Southern University. Other locations have since opened in Augusta(2), Athens, Pooler, Savannah, Milledgeville, Rome and Atlanta, on Moreland Avenue near Little 5 Points.

Cook-Out plans to open additional locations in Atlanta near Georgia Tech, Kennesaw near Kennesaw State University and in Winder. Industry sources say Cook-Out reportedly has plans to open 20-25 locations (chain-wide) annually over the next five years.

Cook-Out’s mission statement is “To serve customers the highest quality food in the least amount of time in a professional well run way, overall to be the best in the QSR business.”