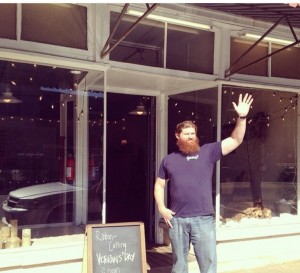 Red Beard Brew Bars has officially closed it’s doors in downtown Bowdon.  This was a neat shop that offered brew bars which were all natural soaps crafted by their homebrewed beers. Zeb enlisted in the U.S. Marine Corps. in 2001 and spent 8 years serving our country. In the Marines he became a Scout Sniper, deployed to Iraq, became a Recon Marine and traveled the world as a military trainer and adviser. Upon returning home Zeb and his wife Lauren started Red Beard Brew Bars out of their home then ultimately opened their retail location in downtown Bowdon this past September.  The family is moving because Zeb has decided to enroll in Asbury Theological Seminary in Wilmore, Kentucky.  You can still shop for the wonderful Red Beard Brew Bars online at http://www.redbeardbrewbars.com .

If you’re interested in renting this beautiful retail space in downtown Bowdon with plenty of space and gorgeous hardwood floors contact Jim at 770-375-5838 for pricing and more information.