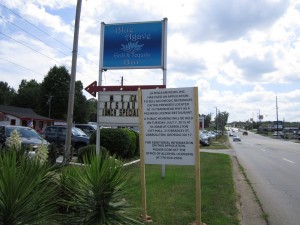 Last week we spotted a legal ad for a new Mexican Restaurant off 727 Bankhead Hwy. As you might recall the former Blue Agave Grill & Tequila Bar was open for a few months and has sat vacant for quite sometime. A name for the new restaurant appears to be La Finca Mexican, but cannot be 100% confirmed. We have tried to reach out to the owner of the establishment but have not been able to reach them. Another Mexican Restaurant opened just a few weeks ago off Highway 27 near WalkerGMC. When the former Blue Agave opened up, weeks later the former one on US 27 by WalkerGMC opened and then closed around the same-time Blue Agave did. Interesting? More details will be included below this in the next few weeks.

Would you like more Restaurants and Appealing Family Experiences in Carrollton?