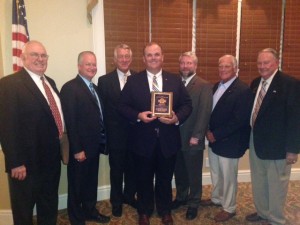 (Carrollton, 7/6/15)— James A. “Jay” Gill, Jr. has been honored by the North Georgia District of Sertoma (Service To Mankind) International as the Sertoman of the Year for 2014.

Gill became a member of the Carroll County Sertoma club in 1994 while attending the University of West Georgia and immediately became involved by participating in most of the club’s fundraising and special events. A few years later, he would begin to assume leadership roles by first serving on and chairing committees, serving as Sergeant of Arms and as a board member, and later serving as president in 2007-2008. His involvement includes assisting in the establishment of the Fantasy Baseball Camp for speech and hearing impaired children, coordinating the annual Drug Awareness Rally and Camp Sertoma, which later became part of Lion’s Safari Park, and garnering sponsorships for the Midnight Madness golf tournament.

“It’s rare to find someone involved in civic organizations at such a young age and still find them heavily involved 20 years later,” said Woodrow Hudson, past International President of Sertoma International and current Carroll County Sertoma Club director. “Jay has provided the same leadership to Sertoma and the community as he has to Carroll EMC. He is truly an asset to all of us.”

Sertoma (Service to Mankind) was established in 1912 as the Co-Operative Club in Kansas City, Missouri. Now, Sertoma clubs can be found throughout the U.S., Canada and Mexico. Historically, the organization has focused on speech and hearing health problems, particularly in children, but has since adopted programs targeting drug abuse education and projects promoting freedom and democracy to school-aged children. Local Sertoma clubs also sponsor and support teen and collegiate clubs in area schools.