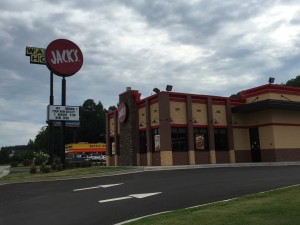 The brand new Jack’s in Bremen off Highway 27 just north of I-20 is now open per the sign which reads, “Hey Bremen! Your new biscuit & burger stop now open.” We drove by around lunch today after receiving a news tip from our follower Kevin, the restaurant wasn’t to busy at the time. On July 13th, 2014 we announced that Jack’s was coming to Bremen. This would be exactly 1 year from the time we received the information to the time Jack’s opened! Bremen enjoy your new Jack’s!