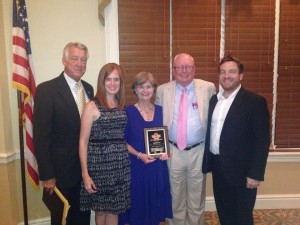 (Carrollton, 8/4/15)— Judge Daniel Parks Camp of Carrollton, GA has been named as the 2014 Service To Mankind Award honoree by the North Georgia District of Sertoma International. The award is the highest honor bestowed by the civic organization to a non-member and represents the commitment and perseverance of the individual to better his or her community and beyond. Judge Camp was honored posthumously by local clubs in Carrollton and Bowdon prior to being selected for this statewide award.

The late Judge Camp was a well-known attorney, judge and philanthropist. Prior to his passing in 2013 at age 66, Camp had served as a local attorney, representing multiple businesses, individuals and municipalities including Carrollton City Schools and the City of Carrollton, and as Carroll County’s juvenile judge from 1996 until his passing. Programs implemented during his leadership as a judge included Wellness Court, Spark Program, Prospective Camp and Truancy Court. All of these programs were built to provide resources and support for youth and their families in time of need. He was also instrumental in bringing the Court Appointed Special Advocate program to Carroll County.

Camp’s works have been recognized by other organizations across the state as well. He has been recognized by the Council of Juvenile Court Judges of Georgia as a “Judge Aaron Cohn Award” recipient for his efforts for juvenile justice and child welfare in his community and the state of Georgia. He has also received awards from Carroll County Family Connection, Optimist Club, Carroll County Board of Commissioners and West Georgia Habitat for Humanity.

“This award reflects the impact that Dan had on this community and the people he affected each day,” said Jim Gill, past President of Sertoma International and current Carroll County Sertoma Club treasurer. “Where many people make sure their deeds are well-publicized, Dan was a silent warrior for those in need. He fought for the most vulnerable members of society, our children.”

After receiving a bachelor’s degree from Mercer University and a Juris Doctor from the Walter F. George School of Law, Camp served in the United States Army and Army Reserves from 1970 to 1978 after which he resigned his commission as a captain. He and his wife, Linda, moved to Carrollton in 1971 when he began practicing law with Wiggins & Camp and was a member of the Georgia and Florida Bar Associations. They have been active members of the First United Methodist Church and raised their three children, Jim, Parks and Cathleen, in Carrollton. One of Camp’s greatest passions was singing with the Men’s Ensemble choral group which he did for more than 20 years and served on its board of directors for eight.

Sertoma (Service to Mankind) was established in 1912 as the Cooperative Club in Kansas City, Missouri. Now, Sertoma clubs can be found throughout the U.S., Canada and Mexico. Historically, the organization has focused on speech and hearing health problems, particularly in children, but has since adopted programs targeting drug abuse education and projects promoting freedom and democracy to school-aged children. Local Sertoma clubs also sponsor and support teen and collegiate clubs in area schools.