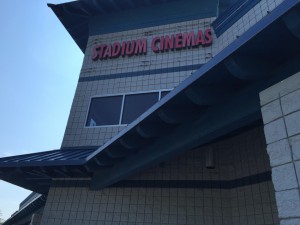 Very early on Friday morning a news tip landed in our Email Inbox from Ms. Donna who informed us that she did not see the Carrollton listings on Georgia Theater Companies’ website. Indeed the movie listings and the Carrollton Stadium Cinemas location for Georgia Theater Company were gone. We arrived at the Box Office before Lunchtime and saw a few things that sparked more curiosity, such as Regal Entertainment Group cards sitting inside the Box Office Window. The General Manager, Austin Nichols, greeted us and told us more about the changes. He says, “Regal Entertainment Group will soon start making several upgrades to the Carrollton location.” The specifics he could not discuss at this time because of the suddenness of the change. The Carrollton Stadium Cinemas will hopefully reopen at 4pm as Regal Cinemas on Friday September 4th. Regal Entertainment Group is headquartered in Knoxville, TN and operates over 7,334 screens in almost 600 locations across the United States. This includes Regal Cinemas, Edwards Theatres, and United Artist Theaters. Soon listings for movies and showtimes will appear on Regal’s websites along with Fandango. We are very excited about this positive change! More exciting changes are on the way for the Shopping Center as well!