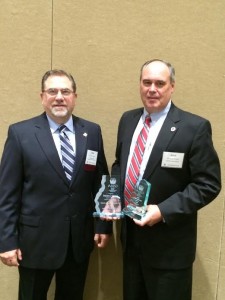 (Carrollton, Ga. – October 15, 2015) The Georgia School Superintendents Association (GSSA) announced the recipient of the 2015 Bill Barr Leadership Award at its fall Bootstrap Conference in Athens, Georgia on Wednesday, October 14. The Bill Barr Leadership Award is named after Dr. Bill Barr, who served as GSSA’s executive director from 1991 to 1999. It is considered a coveted award in public education in Georgia and is given to a superintendent with exceptional skills in mentoring colleagues and fellow leaders. This award is given to only one Georgia superintendent each year. This year, GSSA awarded the recognition to Mr. Scott K. Cowart, Superintendent of Carroll County Schools.

Cowart is in his sixth year as the school system’s superintendent and has a total of 36 years in education. Mr. Cowart has mentored many superintendents through the years, providing a listening ear, valuable insight and practical guidance in an effort to ensure their success. While he finds it important to impact students all over the state by mentoring sitting superintendents, Mr. Cowart believes that it is imperative to work strategically to build the leadership capacity of those in leadership position as well as those who aspire to be school leaders in his own school system.  ​S​uperintendent Cowart stated, “It is an honor to receive the Bill Barr Leadership Award. Dr. Barr was one of my mentors and one of the most outstanding educators Georgia has ever had. He was a role model for how superintendents should lead.”