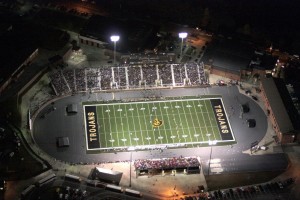 Carrollton, GA – The athletic department at Carrollton High School announces the release of a new book highlighting the Trojan Football and Trojan Band programs. The hard bound book covers the Carrollton programs from 1956 until 2012. Photographs, narratives and other information is contained the historical account.

Trojan Athletic Director David Brooks said of the book’s release, “FIGHT LIKE A TROJAN is a must have for every supporter of the Trojan Nation. The incredible legacies of the Trojan Football and Band programs are evident on each page. Friday nights are special in Carrollton, Georgia and Trojan fans can look back with the same excitement as we look forward.”

An excerpt from the book reads:

FIGHT LIKE A TROJAN – Seven decades of Friday Nights in Carrollton, Georgia is as special as the Friday nights in chronicles. In the state of Georgia, Carrollton High School stands alone as the Gold Standard in high school athletic programs. With seven state championships and numerous runners up, few schools can match the rugged determination of our Trojans when we take the field. With our Trojan Band providing the accompaniment, our Gold and Black has brought down the thunder of victory for almost 70 years.

The pictures and words found in FIGHT LIKE A TROJAN allows the reader to experience the magic of what being a Trojan is all about. Memories scamper from each page like Copeland or Morrow sprinting around end. If you are a member of the Trojan Nation, FIGHT LIKE A TROJAN promises to delight your senses in a way few books can.

Copies are limited and sell for $30 each. FIGHT LIKE A TROJAN is on sale now at the Carrollton High School Front Office, the Trojan Nation Store and at the Squire Shop on Maple Street.

A List of What’s Opening in the West Georgia area