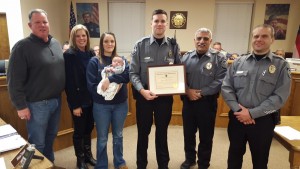 UPDATE (Jan. 7, 2016): To further honor Officer Clark Cleveland’s quick action to save an infant’s life, Chief Mansour and the Villa Rica Police Department are pleased to announce a special opportunity for citizens to receive the same lifesaving training free of charge. On Saturday, January 23, 2016 the Training Staff of the Police Department will be holding American Heart Association approved “Infant CPR.” The program will teach the lifesaving skills of rescue breathing, chest compressions and how to clear an object obstructing the airway of an infant. The standard of “infant” for the purposes of CPR techniques is for the age of newborn to 12 months.

There will be two sessions lasting two hours each on January 23, 2016. The first session is from 9 AM to 11 AM. The second session is from 1 PM to 3 PM. Both sessions will be in the Holt-Bishop Justice Center, Municipal Courtroom, 101 Main Street, Villa Rica, GA 30180. To sign up for this class please complete an application located at the Villa Rica Police Department. Deadline to sign up is January 19, 2016. Class size is limited.

Villa Rica Police Officer Clark Cleveland was honored on Tuesday by Chief Michael Mansour together with Mayor J. Collins and City Council Members for his lifesaving efforts involving an infant.

At about 3:45 pm on Friday, December 18, 2015, Kelly Hite and a friend came frantically into the police department lobby asking for help. Hite, who owns the VR Barber Shop in historic downtown Villa Rica, was holding one-month-old William Mulder who stopped breathing and had turned blue.

Officer Clark was in the reception area of the police department and quickly assisted by administering back compressions to clear the child’s airway. After a few seconds, the baby began breathing again. Officer Cleveland summoned an ambulance while he and Captain Scott Parker along with others monitored the infant’s condition until medical personnel arrived. The child was transported to Children’s Healthcare of Atlanta at Scottish Rite where he was hospitalized for three days.

Officer Cleveland, a 2007 graduate of Villa Rica High School, credits his lifesaving ability to the CPR training he received during his days as a cadet in the police academy.