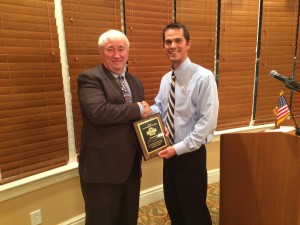 (Carrollton, 1/11/16)— Charles W. Hodges has been honored by the North Georgia District of Sertoma (Service To Mankind) International as the Sertoman of the Year for 2015. The honor is awarded annually and recipients must have been selected by their local club as its Sertoman of the Year to qualify.

Hodges became a member of the Carroll County Sertoma club in 2002 and quickly became involved by serving as a director and later as sergeant of arms before being elected president of the club in 2005. After his term as Chairman of the Board, Hodges would agree to serve indefinitely as sergeant of arms at the request of his peers due to his approach and humor. As a result of his commitment and success, he agreed to serve an unusual second term as president for the club in 2014.

“Charles’ dedication, commitment and enthusiasm exemplify what a civic club should be,” said Woodrow Hudson, past International President of Sertoma International and current Carroll County Sertoma Club director. “This award not only demonstrates how he stands out in our club locally, but it shows how his service stands out across our state.”  Charles Hodges’ involvement in the Carroll County Sertoma Club includes an array of programs and events supported by the local organization. He has taken on personal roles in the Midnight Madness golf tournament, Drug Awareness Rally and Fantasy Basketball Camp, which began in 2013 and partners with the University of West Georgia and Carroll County Boys and Girls Club. However, he is most recognized by his local club for his interest in the Sertoma Fantasy Baseball Camp for speech and hearing impaired children. The camp is a joint effort with the University of West Georgia baseball team, speech- language pathology program and Comprehensive Community Clinic. Hodges often orchestrates the entire event and personally purchases gloves, bats or other supplies needed for the camp.

Hodges spent 12 years as an Army officer, four years active duty including Desert Storm and eight years in the Reserves. After earning his PhD in finance from Florida State University in 1993, Charles and his wife, Brenda, moved to Carrollton in 1996 when he became a professor of finance at Georgia State University. In 2001, he began working at the University of West Georgia while continuing as an adjunct professor at GSU and Southern Illinois University Carbondale. Hodges is also the course lead and professor of finance for the highly-ranked Georgia WEBMBA program. He has scholarly publications of more than 30 peer-reviewed and multiple non-peer reviewed articles, conference proceedings and working papers.

Sertoma (Service to Mankind) was established in 1912 as the Co-Operative Club in Kansas City,Missouri. Now, Sertoma clubs can be found throughout the U.S., Canada and Mexico. Historically, the organization has focused on speech and hearing health problems, particularly in children, but has since adopted programs targeting drug abuse education and projects promoting freedom and democracy to school-aged children. Local Sertoma clubs also sponsor and support teen and collegiate clubs in area schools.

Transitioning out of a Nursing Home Can Be Tough, Let Three Rivers Help