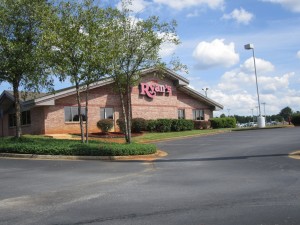 According to numerous now former employees of Carrollton’s Ryan’s Steakhouse, the restaurant is closed. It was reportedly closed earlier Thursday as employees were arriving for their shifts, fully unaware. Food Management Partners, which owns Ryan’s Steakhouses across the United States has closed several underperforming stores today including the Carrollton location. You can click here to see an article from a news station in Huntsville, AL, about several North Alabama closings. Ryan’s Steakhouse in Carrollton was located at 1156 Bankhead Hwy. In the past several months & years the Bankhead Hwy corridorhas seen many closings such as a newly reported K-Mart closing, LG’s Pawn Shop, Long John Silvers, Big Lots, and Sonic. There is hope for the corridor though: First Tuesday Mall has recently added Roses Express and Dollar Tree with other possible stores on the way. Tower Plaza has remodeled and added Ollie’s Bargain Outlet, Badcock Home Furnishings, and Hibbett Sports. Taj Interior Consignment also opened near Lake Carroll recently. We wish the best for the former employees of the affected restaurant and retail closings as of late.

A statement from Food Management Partners of Ryan’s Steakhouse is expected today, and we will update you once it’s available.