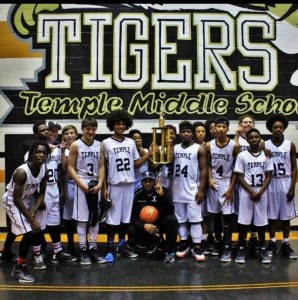 (Carrollton, Ga. ­ February 3, 2016) The Temple Middle School boys’ basketball team takes the Small School Championship for the second year in a row defeating Bremen Middle School with a final score of 72­67. The team went into the championship tournament as the first seed.

Mrs. Gail Parmer, Principal of Temple Middle School, stated “We are extremely proud of this team of players who showed such determination and courage as they defended the championship title for the 2nd consecutive year.”