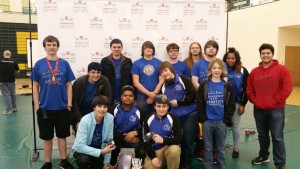 The action­-packed day required middle and high school students to execute the VEX Robotics Competition game Nothing But Net, which is played by scoring colored balls in high and low goals, as well as by elevating the robot in a designated climbing zone. As tournament finalists, the teams qualified for the chance to compete at VEX Worlds in April against top teams from over 30 countries worldwide.

Carroll County College and Career Academy’s VEX team is comprised of over 25 high school and middle school students from Bowdon, Central, Temple and Villa Rica. To prepare for the competition, the group worked together, using VEX EDR, to design and build a robot that could quickly and efficiently solve specific obstacles and challenges that come with playing the game Nothing but Net. The Carroll County College and Career Academy team has three robot teams designated 3921A, 3921B and 3921C. To qualify for state, competition teams must win a competition during the regular season or achieve high judge ratings.

Each week, the students apply what they’ve learned about science, technology, engineering and math in order to build the semiautonomous machines. An equally important set of skills is learned through the competition ­­communication, project management, site management and the importance of composure, because students have to learn how to lose as much as they have to learn how to win.

The Carroll County College and Career Academy’s VEX Robotics team meets in the CCA engineering lab after school on Thursdays each week throughout the year, even in the summer. Many students attend the engineering class led by Mr. David Green; however, the group also has many students who just come to CCA to participate in the Robotics Club. The students learn about electronics, programming, mechanical systems, animation, 3D CAD, computer aided machining, web design, and materials fabrication.

CCA Team 3921 will be competing in the upcoming VEX World Robotics Competition on April 20­23, 2016 in Louisville, Kentucky. The event is open and free for media, families, and other community members to attend.