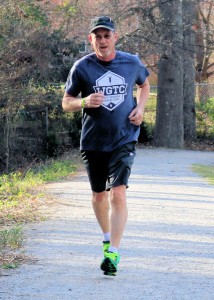 At 64 years old, John Crosby has seen a lot of things change in his lifetime.

A Carrollton resident since 1982, Crosby has seen the city grow from a small town into a vibrant community. Another thing he’s noticed is that in this technology-obsessed world, people have “gone to using computers all the time.” He’s also seen a change in people’s behavior.

“I notice there’s a lot less smoking in our county,” said Crosby. “There’s still a lot of obesity, but I’m hoping people are getting to where they’re becoming more active.”

Having dealt with health issues in the past, he knows a thing or two about getting and staying healthy. In 2009, he was diagnosed with melanoma. When he went in for surgery to remove the cancer, the staff at Tanner Medical Center/Carrollton found that his blood pressure was extremely high.

“They sent me back for a stress test and found out I had a blocked artery,” said Crosby.

A stent was put in to open the artery. About a month later, he had surgery to remove the cancer. Having gone through multiple health issues, he was ready to lead a healthier lifestyle and started taking Tanner Health System’s “heart healthy” classes.

Crosby admitted that he hadn’t been very active in the past.

Those bad habits were smoking, which he stopped after having the stent put in, and unhealthy eating. His favorite foods included red meat and iced potatoes, a southern dish that’s sometimes cooked in bacon grease.

In 2013, he decided to join Get Healthy West Georgia’s Weight Loss Challenge, another program offered by Tanner.

“I lost about 30 pounds,” said Crosby. “Then I joined the second weight loss challenge and lost about 26 pounds.”

Participants strive to lose 7 percent of their body weight and get 150 minutes of physical activity a week. The one-year program includes 16 weekly sessions with monthly follow up. During the program, participants work with a lifestyle coach in a group setting.

“Weight loss is not nearly as hard as keeping it off once you’ve lost it,” said Crosby. “It might take you a year to lose it, but you got the rest of your life to fight to keep it off. Anything you do to help keep it off — make it an easier process — the better off you are because it’s easy to put back on.”

To help maintain his weight, he started running on the mile-and-a-half walking trail on the campus of Tanner Medical Center/Carrollton.

“I live about a mile and a half from the hospital,” said Crosby. “I run the track behind the hospital a lot during the summer because it’s shaded.

He also began running on the Carrollton GreenBelt. At one point, the frequency of his runs decreased. But he was motivated to continue in February when he started running with a group of local runners who were members of the West Georgia Track Club.

“I started slowing down and they came along,” said Crosby. “I got in with them and the match was good. It just helped me get out and stay motivated to stay healthy, get healthier and keep my weight in check.”

He joined the West Georgia Track Club in August and runs with them about two times a week. He realized it was easier to exercise with a group.

“It doesn’t really matter if you’re in a gym or on a treadmill or out running on the side of the road, if you’re doing it by yourself, it’s tough,” Crosby said. “It’s a lot easier to stay motivated, show up and keep healthy with a group.”

He also enjoys the camaraderie.

“Being out there with people, socializing with them, having somebody to talk to makes a run go by easier and faster,” said Crosby. The time just flies when you’re talking to people and spending time with people who enjoy the same thing you enjoy. And you’re getting the benefits of health.”

In addition to participating in group runs, he signed up for the winter session of Move It Mondays, a walk-to-jog program offered by Get Healthy, Live Well in partnership with the track club. The eight-week program includes weekly group sessions featuring a combination of walking and running. The winter program is underway, but more sessions will be held in the summer.

On March 12, Crosby participated in the West Georgia Track Club Inaugural Road Race, which was sponsored by Tanner. The race included a 5K and 10K course. Crosby, who has run a lot of 5Ks over the last several years, signed up for his first 10K with a goal of completing the course in less than an hour.

He accomplished his goal, completing the race with a time of 54:55. But running isn’t the only thing Crosby does to stay active. He also lifts weights, goes to aerobic classes at the senior center, plays tennis and bowls.

To learn more about the Diabetes Prevention Program and Move It Mondays, visit www.GetHealthyLiveWell.org.