Carrollton, GA – Carroll Electric Membership Cooperative was one of the 41 EMCs in Georgia that brought the issue of line worker safety before the 2016 Georgia General Assembly in the form of House Bill 767. Governor Nathan Deal signed the bill into law April 19.

“As anyone could imagine, safety is the single most important aspect of our industry,” said Jerome Johnston, chief operating officer for Carroll EMC. “While we have a great deal of training and protocol in place to manage electricity, a careless or distracted driver is completely out of our control and often times more dangerous than the line work being performed.”

House Bill 767, the “Move Over for Linemen” legislation, requires any motorist approaching utility linemen at an active work site, as indicated by traffic cones or flashing yellow, amber, white or red lights, to change lanes or reduce their speed to a reasonable and proper speed below the posted speed limit. Any motorist who does not change lanes or drop their speed to avoid the utility workers can be fined up to $250 per incident.  The new bill, effective July 1, applies to all types of utility workers, including electric, natural gas, cable and telecommunications workers, right-of-way crews or utility contractors.

“This legislation was not only a collaborative effort with other EMCs, but with our delegation as well,” stated Jay Gill, Manager of Communications and Government Relations for Carroll EMC. “Senator Mike Dugan was instrumental in getting the bill structured properly and passed.”

Gov. Deal signed the bill during a statewide event to recognize Lineman Appreciation Month in April. The EMCs, Georgia Power, municipal systems, Electric Cities of Georgia, MEAG Power and other utilities gathered at the State Capitol as Gov. Deal, members of the legislature and the public said “Thank You” for the work and sacrifice of linemen and keeping the lights on 365 days a year. 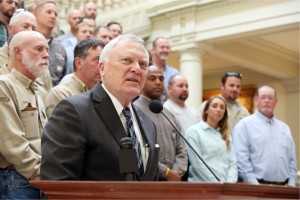 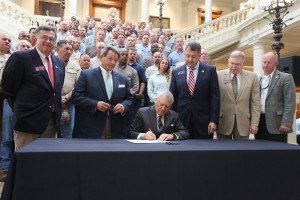