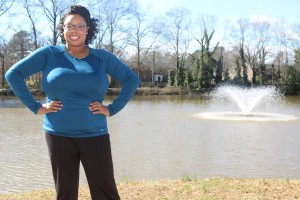 Aleatha Dowell was nervous when she walked into her first health coaching session.

After gaining 50 to 60 pounds in a year, suffering through many headaches and hearing a heartbeat in her ears (pulsatile tinnitus), Dowell went to see a doctor in 2009 who diagnosed her with polycystic ovarian syndrome, or PCOS. Her doctor went on to tell her that she was also prediabetic based off that diagnosis.

According to the U.S. Department of Health and Human Services, more than 50 percent of women with PCOS will have diabetes or pre-diabetes (impaired glucose tolerance) before the age of 40. In addition to taking medication for PCOS, Dowell had to lose weight, which she didn’t do at the time. She was also diagnosed with pseudotumor cerebri, a condition that causes the pressure in your head to become elevated.

“I was not healthy,” said Dowell. “Due to my unhealthy lifestyle, I later had my gall bladder removed and was diagnosed with sleep apnea.”

Her friend and coworker, Heather Wallace, told her about Tanner’s health coaching program. The program, which is only available to Tanner team members, is part of the health system’s effort to improve the health of its workforce by helping employees lose weight, keep their chronic diseases in check and adopt healthier lifestyles. The program, Well for Life, employs two registered dietitians and an exercise specialist, who work one-on-one with employees and lead group classes.

“I was working out and eating right on my own, but I needed assistance,” said Dowell. “I had lost weight without the help of my health coach, but gained all the weight back plus more.”

Then in May 2015, her 12-year-old niece was diagnosed with type 1 diabetes, which really opened her eyes.

“I didn’t want to become a diabetic, I didn’t want headaches every day, and I definitely didn’t want to sleep with a CPAP (continuous positive airway pressure) machine for the rest of my life,” said Dowell. “I desperately needed a change and really needed to do this for myself.

So she decided to sign up for health coaching. It became the one of the best decisions she’s ever made.

“I didn’t know what to expect from the health coaching session,” said Dowell. “I wanted to be happy and healthy. I wanted to try and achieve something I have never done before. I wanted to prove to myself that I can do it. I didn’t want to be a quitter.”

“I was kind of nervous,” said Dowell. “We talked about goals and the reason I’m making the choice now. [Schoerner] has a bubbly attitude, which I absolutely love. She was very thorough. She made it clear that it’s not what she wants, it’s what I want. No pressure.”

At that first appointment, Dowell’s health and wellness vision was centered on preventing diabetes, getting off her CPAP machine and losing weight so she could wear the things she wanted.

“Stress, her work schedule and the convenience of fast food were her biggest obstacles when starting out, but once her mind was set to make a change, she didn’t look back,” Schoerner said.

Dowell left her first session that day feeling like she made the best move for health. After a few months of health coaching, Schoerner recommended that she join the Diabetes Prevention Program (DPP), which is offered through Tanner’s Get Healthy, Live Well.

The Diabetes Prevention Program is an evidence-based lifestyle change program created by the Centers for Disease Control and Prevention (CDC) to prevent type 2 diabetes. It can help people cut their risk of developing type 2 diabetes in half through lifestyle changes. Participants strive to lose 7 percent of their body weight and get 150 minutes of physical activity a week.

The one-year program includes 16 weekly sessions with monthly follow up. During the program, participants work with a lifestyle coach in a group setting. Dowell began taking DPP classes in September.

She thought the class was overwhelming in the beginning.

“I thought it was a lot of work, but it’s work that needs to be done to achieve my goal,” she said. “It’s interesting to learn all of the nutritional values in favorite foods and foods I thought were healthy. Learning to look at calories and fat grams was mind-blowing, but I embraced the change.”

Dowell loves to cook and try new things, so the class gave her the opportunity to revamp some of her favorite foods and make them healthier.

“Learning the correct portion size is really the key,” she said. “You can have anything you want and you don’t have to limit yourself. You can still enjoy food.”

One of the most difficult changes Dowell had to make was finding healthier alternatives for two of her favorite condiments.

“I absolutely love butter and mayonnaise,” she said. “It was very hard to adjust. I didn’t completely give them up, but I have found better alternatives. I used to eat a lot of bread, but I don’t really eat that much now.”

In spite of the challenges, she shined during those 16 weekly sessions.

“Through food and fat gram tracking in the program, she continued her weight loss and learned countless tools to assist her in adopting healthy habits,” Schoerner said. “Through DPP, health coaching, and fun Internet searching, Aleatha has become a role model for making healthy alternatives delicious.”

After 16 weeks, Dowell had lost 9 percent of her body weight. A 7 percent decrease in body weight is shown to significantly reduce diabetes risk, according to the CDC. Dowell’s DPP class is now meeting monthly in group sessions where they provide support and encourage each other.

Despite her success in leading a healthier lifestyle, she was diagnosed with diabetes on Dec. 17.

“Once I started to get serious about my health and weight loss, it was too late,” said Dowell. “My A1C was 6.5 which isn’t that high, but it is classified as diabetes. My family doctor said with diet and exercise I can lower my A1C.”

Her doctor also told her that she could become a maintained diabetic and no longer have to take medicine to manage diabetes.

“My dad was diagnosed at the age of 24 years old,” said Dowell. “I always knew there was a possibility I may become a diabetic, I just didn’t know when. If I would have lost the weight a little bit earlier I could have prevented this diagnosis or at least delayed it.”

She is now enrolled in Tanner HealthBridge through the Well for Life program. HealthBridge allows her to receive free medications. Tanner also provides a free blood glucose meter through Livongo for Diabetes, which allows her to check her blood sugars regularly.

Dowell admitted that checking her blood glucose is new to her so it’s something she has to get used to.

“They want me to check my blood glucose at least three times a day,” she said.

Dowell’s A1C is now controlled, according to Schoerner. Since attending her first health coaching session, she has made great strides in improving her health. She started health coaching weighing in at 260 pounds and lost 32 pounds.

“That’s the lowest I’ve weighed in years,” said Dowell. “I no longer have headaches or hear my heartbeat in my ears. I can fit into jeans I haven’t worn in years. The joy I found in cooking and making healthy lifestyle changes is the biggest of them all. Little victories help me move toward big goals.”

Schoerner commended Dowell on her success.

“It has been very rewarding to work with Aleatha,” she said. “Her commitment to making diet and exercise changes is truly inspiring and has also been rubbing off on her close knit family.”

Schoerner stressed that health coaching is about making small, realistic goals. Long-term goals are set for six months to one year out. Dowell’s next long-term goal is to hit Tanner’s BMI target for next year’s annual health assessment.

“Making small goals through health action planning is how Aleatha is going to hit her next big goal,” Schoerner said. “I am excited to be a resource for Aleatha and see her use all the tools through DPP and HealthBridge to truly change her future health, happiness and self-confidence.”

Dowell encourages other Tanner team members to get involved in the company’s wellness programs.

“Everyone needs to care about their health, so why not join a free program to further assist with your needs,” said Dowell. “It’s not about the losing weight as much as it is about the healthy lifestyle.”

She noted that there are many people who secretly envy others over something they could have themselves.

“I wanted to be healthy and make a change for the better,” said Dowell. “I thought it was hard, but it’s not. I didn’t like where my health was going and my body was telling me I had to make a change.”

She chose to listen, even if it was later than sooner.

“But it’s never too late to start,” Dowell said. “As long as you have breath in your body, you have a chance and a choice. It may not be an easy road, but it’s a road worth traveling. If you want to maintain your lifestyle or change your lifestyle, then these programs are for you.”

In the end it’s all about self-love.

“Your size doesn’t matter,” Dowell said. “Be happy and be healthy regardless.” 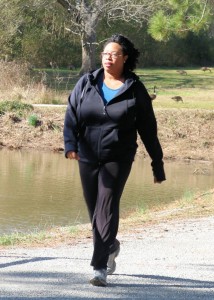