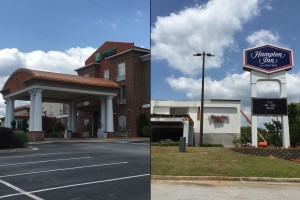 A pair of Bremen hotels are finishing renovations this summer. The first of the pair, Hampton Inn near US 27 and Alabama Avenue began interior renovations in 2015–which the Carrollton Menu reported in August (read the story here)–and recently completed those. Now the attention has turned to the exterior of the building. This is all part of the Property Improvement Plan (PIP) which states that the franchisee must do certain improvements on the property in order to renew their contract with Hilton for another 10 years.

RUMOR BUSTER: The hotel is still open and will be remaining a Hampton Inn.

Across the highway, Holiday Inn Express is going through a similar PIP renovation, mostly on the interior of the hotel. The rooms have been receiving all new furniture, carpeting, lighting, paint and more. Many of the tubs in the bathrooms have been replaced with walk-in showers. The pool has been resurfaced and the fitness center has received all new machines. The front atrium and breakfast area are in the process of being opened up and the meeting rooms are being updated. Renovations are expected to be completed around the end of May.

Harriet Tubman Drama at Center for the Arts Feb. 12