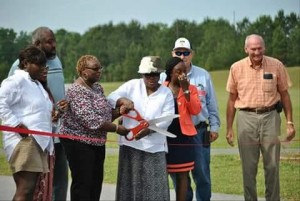 (Carrollton, Ga. ­ May 20, 2016) When Providence Elementary opened in 2010­-2011 Principal Dr. Terie Smith­-Phillips had a vision of a walking track for the school/community. With a lot of hard work and donations, the track became a completed reality in 2014-­2015. A major donor for the project was the Brooks Family Foundation. The Foundation wanted to honor long time friend, Martha Ann Smith, by dedicating the track in her honor. Mrs. Smith, Dr. Terie’s mother, has always valued children, education, and fitness, so the Brooks family felt this was a very fitting dedication. The ribbon cutting and dedication was held May 12th with Mrs. Smith and her family, Lester Harmon­-Mayor of Temple, district office personnel, parents, and the student body in attendance. The PES Pavement Paws running club led the inaugural walk, followed by Mrs. Smith and her family and each grade of students. A reception followed in the media center.