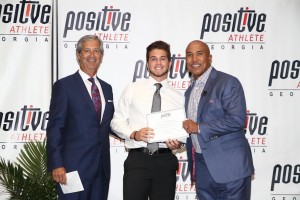 Villa Rica class of 2016 graduate Kevin Bonner was honored on June 7 in a ceremony at the College Football Hall of Fame as a state winner of the Positive Athlete Georgia Award. Kevin was nominated by VRHS soccer coach Jason Cann because of his positive attitude and leadership in the face of significant adversity. In spite of both parents being diagnosed with serious, life threatening medical conditions, Kevin has continued to be a model student at VRHS, maintaining a high GPA, serving on student government, being named Homecoming King and Mr. VRHS by his peers, and serving as a captain and 4­year starter on the boys soccer team. The award was presented by former Pittsburgh Steeler and University of Georgia star Hines Ward.