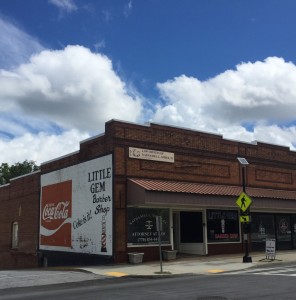 First opening the doors in 1895 as The Parlor, Little Gem is Georgia’s oldest barber shop. The name Little Gem came from an prior employee who, like Crawford, had a prosperous vision for the barber shop. “Little” Jimmy Jackson began working for the shop in 1900 and soon after became the owner. While small in stature, Little Jim was know around town as one of the strongest workers and business owners of Carrollton. He named the barber shop after his nickname, Little Jim, only to alter the “Jim” for the “Gem” we know today. He made the decision due to the popularity of Gem Razors during that time, and so Little Gem was in business.

Jesse Crawford’s dream came true when, after he’d begun working for Little Gem in 1930, he became the owner in 1939. He provided customers with scissor cuts, hot lather shaves, hot towel shaves, and a now “old school” scalp tonic, all of which remain as services provided today. In 1960 Little Gem adopted a clipper method not commonly found in barber shops today. The electric clippers are united with a soft vacuum system that runs above the mirrors for the length of the shop. The clipper with vacuum system gathers the falling hair at the source and prevents its falling all over the customers’ clothes.

Little Gem is now owned and operated by Jesse Crawford’s grandson, John Crawford. John is the third generation Crawford to own Little Gem Barber Shop and has tactfully preserved its rich history. Inside, customers find pictures of Carrollton and Little Gem history dating back 120 years. Taxidermic treasures provided by “customers’ wives who didn’t allow them to hang in the house,” says Crawford, surround the walls looking onto the nearly fifty year old barber chairs. The mirrors, sinks, and cabinets are all 1895 originals and still in use today. At the front of the store is the barber’s pole that was bought second hand to replace the original that was unfortunately damaged when another barber in town accidentally backed his car into it.

The clientele at Little Gem has been as steady and faithful as they come. One customer alone has frequented the barber shop for over eighty years. Other notable customers at Little Gem have included America’s thirty-ninth president Jimmy Carter as well as Sterling Holloway, who is most commonly known as the voice of Winnie the Pooh.

Little Gem was previously located at 12 1/2 Newnan Street until December 31, 1981, when they moved into their current address at 302 Newnan Street. The veteran barbers and stylists who have worked at Little Gem over the last thirty years not only provide a nostalgic barber shop experience but also provide the many modern hair cuts and styles. Walk-ins welcome all day, Monday thru Friday between 9 a.m. and 5:30 p.m.; the shop is closed Saturday and Sunday.