Let Them Eat Toffee is a locally-owned and operated confections shop on the square in Newnan. They specialize in homemade baked goods such as chocolate barks, special chocolate graham cracker treats, and–of course–toffee. A fan favorite features a local ingredient: Georgia pecans. That locally grown ingredient combined with the delicious French toffee keeps customers coming back again and again.

The idea started in 2008 when two close neighbors collaborated on a special recipe. Kerry Graham and his wife Phyllis lived next door to a French couple named Pierre and Rainey Viver, who had been fine French chocolatiers for decades. After a successful run as a professional chocolatier and owner of a restaurant, Pierre went back to his roots and started making fine chocolates again. Business was great until he was stumped with a strange request for Georgia Pecan Toffee for a client in Thomasville, Georgia. Kerry, who happened to have a secret family recipe for toffee, and who had recently lost his job due to the economic downturn of 2007-2008, collaborated with Pierre to enrobe the toffee with the fine French chocolate Pierre made. “Toffee was never my favorite,” business owner Phyllis Graham said. “But the buttery, crunchy, melt-in-your-mouth texture is what has made it our signature.” 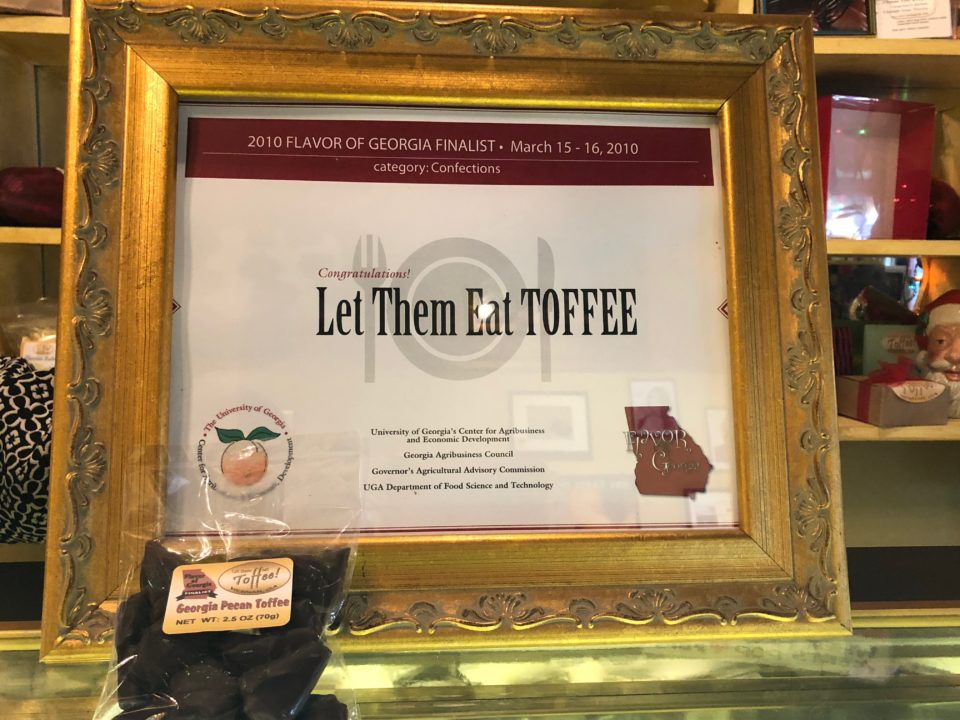 The Toffee was such a hit that it created an idea. “So… fast forward, we were looking for a place to open a chocolate toffee shop, and eventually God lead us to Newnan,” Phyllis said. “We have never looked back.” In 2010 Let Us Eat Toffee entered the Flavor of Georgia contest, which is hosted by the University of Georgia’s Center for Agribusiness and Economic Development. They were selected as one of the top four finalists!

The business name goes back to the French roots of Pierre. During the French Revolution Queen Marie Antoinette is reputed to have said “Let them eat cake” when told her starving peasants had no bread. “We thought that adding the Toffee was perfect along with opening the shop during the downturn of the economy,” said Phyllis.

One item that Let Them Eat Toffee is famous for are their “Fig Newnans,” which is a fig preserve spread sandwiched between two graham crackers and dipped in a fine French chocolate. “In the summer of 2009 the fig tree in our backyard where we were living in Newnan, burst with lush figs, and Kerry woke up one morning with the idea of doing a Fig Newnan” said Phyllis.

Phyllis has a great love for the city of Newnan and has a passion for seeing it grow and develop. She has served on the Newnan Cultural Arts Commission since 2010 and currently serves as chairperson. “My passion for downtown and the wonderful folks that keep moving here, that are attracted to a vibrant and sustainable community, is what keeps me engaged to see Newnan moving forward as a bustling community,” said Phyllis. “We need young people to continue this vibrancy, and I think that is happening. We are very excited about the LINC coming and parts that are already completed.”

Let Them Eat Toffee is located in the Newnan Square at 18A North Court Square, Newnan, Georgia 30263. Their famous products can also be ordered online and mailed to you. Click here to visit their website: www.letthemeattoffee.com