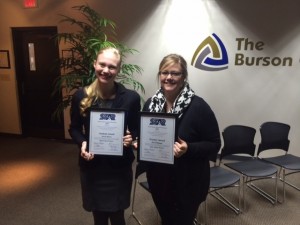 Congratulations to Bowdon High School senior Jessie Moore and Bowdon High School English teacher Kim Whitman. Jessie was selected as Bowdon’s STAR student, and she chose Mrs. Whitman as her STAR teacher. Both were recognized by the Carroll County Chamber of Commerce on Tuesdaymorning. Jessie plans to attend Berry College and major in Government and International Affairs. While a student at BHS, Jessie has served as the Drum Major for the Red Devil Band of Pride for the last two years and has been involved in the leadership of the following clubs at BHS: Serteens, National Honor Society, and Spanish National Honor Society. Additionally, this year, Jessie founded the Model United Nations club at BHS. She was a 2014 Washington Youth Tour delegate and attended the Governor’s Honors Program in Communicative Arts. Jessie is the daughter of Greg and Marsha Moore.