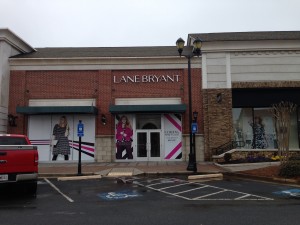 This story would normally be on The Newnan Menu website but due to the popular clothing store we decided to feature it on The Carrollton Menu. The new store is located directly next to Ann Taylor’s Loft at Ashley Park. Lane Bryant recently opened another store outside the regular indoor mall appearance in Douglasville. The Lane Bryant store in Newnan is one of many new stores planned for all across the country. An opening is set for early Spring. The interior of the store looks to be just about finished. Another store is planned to open a few doors down in the former Aeropostale location, Kinnucan’s. The sign that said coming soon for Kinnucan’s is down at the moment but plastic and paper cover the windows. Kinnucan’s is based in Auburn, Alabama and has several locations across the South including the Shoppes at Eastchase in Montgomery. This particular center is in comparison to Ashley Park. Expect an opening date soon.