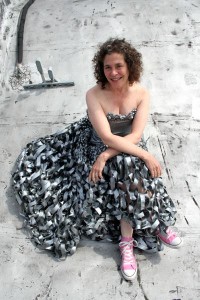 Whitesburg author and playwright Sybil Rosen has scheduled two local book signings for her newest book, Riding the Dog, a collection of nine short stories, which all take place on a Greyhound bus.

The book signings will be held on Saturday, March 7, from 5 to 7 p.m. at Underground Books and Thursday, March 12, at 7 p.m. at the Whitesburg Public Library. The author will be reading from the short stories at 6 p.m. at Underground Books, and the Whitesburg event will be preceded by a book discussion with the author at 6 p.m.
The stories in Riding the Dog come out of the author’s 30,000 miles on Greyhounds and recount what happens when strangers collide in small, cramped spaces. Meet ticket agents, bus drivers, passengers and refugees.

Appearing every other week like clockwork, a mysterious woman beguiles a bus driver with his own precise code of professionalism. Two travelers who have just met exchange trinkets, unaware of a past that connects them. A woman searches the country by bus, looking for her brother who disappeared in New York City on 9/11. A drunken musician loses his most treasured possession on a deserted road in West Texas. A soldier returning from Iraq with PTSD is welcomed home on a broken-down bus.

Rosen is an award-winning novelist, playwright, and memoirist. She has won many awards, including a nomination for an Academy Award for the narration of a short documentary. While she wrote for the TV show Guiding Light, it won an Emmy for best writing. Speed of Light, a novel for young adults, won the 1999 Sydney Taylor Award for Older Readers, and was nominated for the 2000 Mark Twain Award. She has won numerous awards and recognitions for her short stories and plays as well. “Shannon,” a short-story contribution to the German anthology for teenagers, Mensch Sucht Sinn, was translated into Spanish, Catalon, and Slovene. She is a winner of the Berrilla Kerr Playwriting Award. Brink of Devotion, a full-length play, was workshopped at the Sundance Playwrighting Instititute in Provo, Utah. A ten-minute play published by Vintage Press, Duet for Bear and Dog, has received over 100 productions around the world. Last of the Speckled Catfish was a finalist in the 2008 National Ten-Minute Play Contest.

Sybil is an active member of the Friends of the Whitesburg Public Library and a volunteer at the Friends’ bookstore, Harvey’s House of Books.

Press Release sent in to The Carrollton Menu by Ms. Pate.