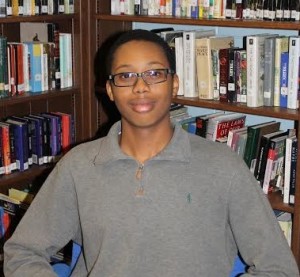 (Carrollton, Ga. ­ May 15, 2015) Furichous J. Jones, a Central High School senior is one of thirteen students from Georgia public high schools that have been named a semifinalist in the 2015 U.S. Presidential Scholars Program, one of the nation’s highest honors for high school students. Each year, up to 141 students are named as U.S. Presidential Scholars. The 13 Georgia students are among 565 semifinalists named this year.

Students have the opportunity to become U.S. Presidential Scholars based on two paths of accomplishment. The majority of the scholars are selected on the basis of broad academic achievement; additionally, 20 additional students are selected on the basis of their academic and artistic scholarship in the visual arts, the performing arts, or creative writing.

All scholars are honored for their accomplishments in Washington D.C. in June. During this trip, U.S. Presidential Scholars are guests of the Commission and enjoy a chance to meet with government officials, educators, authors, musicians, scientists, and other accomplished individuals. Scholars have the opportunity to visit museums and monuments and attend recitals, receptions, and ceremonies. To commemorate their achievement, the scholars are awarded the Presidential Scholars Medallion at a ceremony sponsored by the White House.