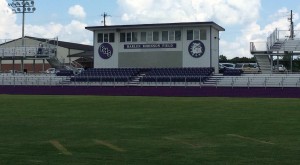 Ranburne High School is on the back end of renovations to their football stadium. Ranburne High School Football Coach Chad Young told The Carrollton Menu that the school has been raising money for two years through fundraisers and donations. The school began the process of upgrading the facilities at the end of last football season. As soon as the last football game was played demolition began on the facility.  The building process officially began in late April.  A majority of the renovations to the stadium are cosmetic.  The biggest changes are the new bleachers and seating on both the home and visitors side. Coach Young, other coaches, and volunteers completed footing and sidewalk in areas of the stadium.  The stadium will also feature a new scoreboard and a flag pole that will be illuminated.  Stadium Pros completed a majority of the upgrades and Web Concrete donated concrete to the school.