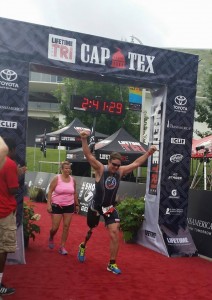 On the evening of July 1st I had the honor of meeting John Pulliam and his wife Cary. This was different than any other story I have ever covered this was not another restaurant or business opening or closing but much more.

On January 26th 2013 John’s life along with his family and friends lives were changed forever.  It was on that winter day that John was out riding his motorcycle on Highway 27 in Carrollton when a pickup driver turned left in front of him striking him and his motorcycle. The driver of that pickup truck left the scene of the accident. As a result of the accident John had his right leg amputated. 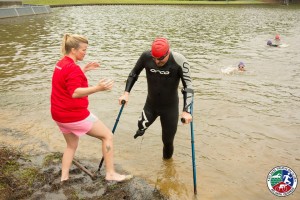 Since January 26th 2013 John and Cary’s life has been different. John and Cary are extremely active and have gone to numerous wheelchair races, triathlons and other such events.  John has both a racing prosthetic and an everyday prosthetic. A while after the surgery John’s residual limb began to grow back causing bone spurs and pain.  This past December John underwent a revision surgery to help ease the pain. The Getting2Tri Foundation got in touch with John and offered him a racing wheelchair.  He told me he was excited to get in it and race around the track. John took the wheelchair to the track at Mt. Zion high school and after his 3rd lap around the track he said his arms felt like jello.  Two weeks later he completed a wheelchair 5K.  On Tuesday June 30th John competed in the Cedartown Wheelchair 5K and recorded a personal best time of 18 minutes and 30 seconds.  When I asked John what goes through his mind while he is racing he said this “When I am out there racing I am dead last sometimes, but I am not racing against the other guys out there. It’s the voice in the back of my head that I am racing against that says you don’t really feel like doing this today…just sit on the couch watching Tv and eating Cheetos.” 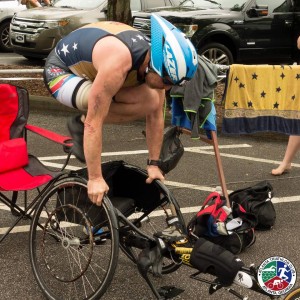 In late July, John and Cary will participate in a 5K swim.  Cary will be in a kayak to serve as John’s eyes throughout the event to keep him informed on what is ahead so he won’t have to waste necessary energy.

John told me he is an adrenaline junkie and enjoys participating in these events. When asked what he enjoys about the events so much he said “They have given me back physical activity in my life and crossing the finish line gives me a sense of accomplishment that I was able to complete the race and here is the medal and t-shirt.”

John’s pastor visited him in ICU and asked him if he was done riding his motorcycle. John said he said to himself “You know if you never ride again you will regret it.” John told me over time he would go out to his garage and stand up the bike up and lift his leg up over it.  In October John rode the exact route of his accident in January of 2013.  John said “It was intimidating and peculiar but I had unfinished business. It was a phenomenal sense of relief and anxiety up until that point.” 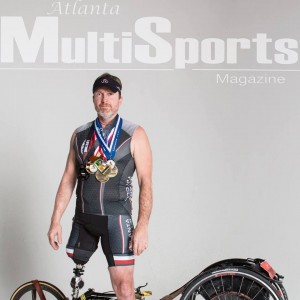 I asked John’s wife Cary what their life has been life since the accident.  Cary said “This is our new normal, it effects everyone that knows us.  This is the best possible outcome for the situation that happened to him.”  I asked John what he would like others to learn from his life and he said quite a few things which were truly amazing. He said “The only way you lose is if you quit.  Don’t quit…don’t give up and keep trying and you eventually will succeed.”  John went on to say “Just because you are different doesn’t mean there is something wrong. We all have struggles you just see mine.”

John plans to compete in a 70.3 mile triathlon in September in Augusta, Georgia.  John is also starting to do motivational speaking and you can contact him at [email protected] 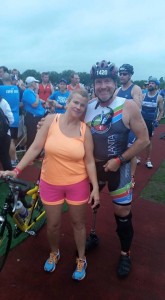