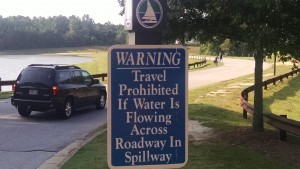 Villa Rica and Douglas County officials have communicated with the Mirror Lake Community Association that they are strongly opposed to closure of the private road. Douglas County Fire Chief Scott E. Spencer put the Association on notice that “if this portion of Mirror Lake Parkway is closed, Fire and EMS response times will drastically increase for areas north” of the dam. Chief Spencer further stated in his letter that “Fire and EMS routes to some (in the Mirror Lake development) would increase from 1.1 miles to as much as 4.3 miles, creating a public safety concern.”

Mirror Lake Parkway spans 1.3 miles in length from Stockmar Road south to Conners Road. The road is private with the exception of the portion from Hawk’s Ridge south to Conners Road, which spans 1,163 feet. The Mirror Lake Community Association owns the portion “that commences just south of the intersection with Southwood Drive in the Southwood community of Mirror Lake and continues until the southern edge of the dam. The remainder of the private roadway through the Mirror Lake development is owned by DB Aster III, LLC.

The Association wants to absolve itself from the “exposure of possible liability” and in doing so, has requested the City of Villa Rica accept the private road as a public street, which traverses the dam. The Villa Rica City Council heard an initial report from city staff at its September 1, 2015 monthly meeting and directed the City Manager to engage an engineering firm to fully evaluate the private road and present at its next regular meeting what it would cost taxpayers to bring the roadway into compliance with Georgia Department of Transportation guidelines.

“The City is evaluating the cost and it would be irresponsible for the City to take action without knowing that cost,” said Villa Rica City Manager David A. Milliron. “An engineering firm has been engaged and I expect to make a full report at the next regular City Council meeting so your elected officials can make an informed decision.”

Press Release From The City of Villa Rica