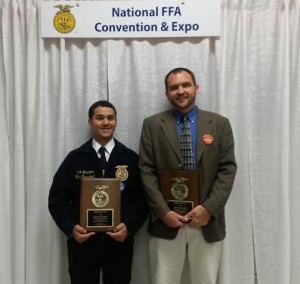 (Carrollton, Ga. ­ November 11, 2015) On October 31, 2015, Bowdon FFA Member, Erik Lovvorn, won the National FFA Energy Systems Award in Louisville, Kentucky. Lovvorn was one of only 4 members chosen to compete for the award from a pool of over 600,000 FFA members across the country. Lovvorn finished first in the event that drew students from as far away as South Dakota and West Virginia. Erik was awarded a five hundred dollar prize for being named a national finalist, and an additional five hundred dollar prize for being named the national winner. Pictured with Erik is his FFA Advisor, Ryan Ayers.