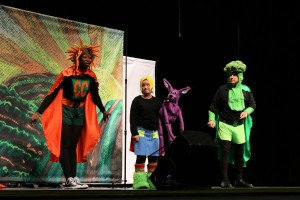 Eight-year-old Cadence Wilson never really thought broccoli was good, but after watching a new fun and
educational play produced by Tanner Health System’s Get Healthy, Live Well, she has changed her tune.

Convincing kids to eat their fruits and veggies is no small feat, so that’s why Get Healthy, Live Well
enlisted a troupe of three vegetable superheroes to show kids that eating healthy can be fun. With its
“Eat a Rainbow” play, Get Healthy, Live Well has come up with an innovative strategy to educate local
children about the importance of eating more fruits and vegetables. The play was performed in front of
1,600 Carrollton Elementary Schools students on Feb. 11 at the Joshua Mabry Arts Center.

“Eat a Rainbow” features a mad scientist named Dr. FunKill who tries to feed a little girl evil doughnuts
until she is thwarted by Broccoli Boy, Captain Carrot and Rude-A-Bay-Girl, who teach children to protect
themselves by eating a rainbow — five portions of fruits and vegetables a day.

“The play makes healthy eating fun, but its message is serious,” said Tanner Dietitian Christina
Schoerner, MS, RDN, LDN. “For the first time ever, this generation of kids is expected to live shorter lives than their parents because of unhealthy diets and lifestyles. This play teaches kids to replace unhealthy foods with a variety of healthy fruits and vegetables.”

To get this message out, Get Healthy, Live Well reached out to west Georgia writers and artists who
used their gifts to craft a play that not only informs, but entertains. The cast of “Eat a Rainbow” includes Carrollton business owner Ginna Blair, local musician Mark Lyle, and Samantha Cotton, a University of
West Georgia student majoring in music. The script is from local writer Mimi Gentry.

Blair is the director and an actor in the play. The music was recorded locally at Southside Studio, which is owned by Lyle. Jim “Poppy” Boyd, a Grammy Award-nominated children’s songwriter who lives in west
Georgia joined the creative team to write the songs, “Read It Before You Eat It” and “Eat Fruits and
Veggies, We Don’t Mind.”

About 200 families attended the premiere of “Eat a Rainbow” at The AMP late last year. The play’s next
stop will be at Sand Hill Elementary School in Carrollton on Feb. 26.

The Carrollton Elementary School students at the Feb. 11 performance were engaged in the play from
beginning to end. The show was so entertaining that they couldn’t contain their excitement while
watching the superhero characters sing, dance and work together to foil Dr. FunKill’s plan. Near the end
of the play, it was clear that they were not only having fun, but paying attention.

The students were asked to remember what Rude-A-Bay-Girl taught them about the importance of
reading food ingredient lists. When asked what to do if you can’t read the ingredients during an
interactive part of the play, they didn’t hesitate to respond — their small voices carrying out over the
theater.

That was a lesson that stuck with 8-year-old Celestra Cruz.

“My favorite character was [Rude-A-Bay-Girl],” said Cruz, a second-grade student. “She told us
something important, that if you can’t read it, don’t eat it. Vegetables are good for you and they make
you healthy. Broccoli doesn’t taste that bad.”

Eight-year-old Uriel Salinas’ favorite part of the play was watching Captain Carrot dance and the funny
antics of Broccoli Boy, who is the bravest — but not the smartest — superhero. What lesson did he take
away from the play?

Melanie Brooks, second-grade administrator at Carrollton Elementary School, commended Get Healthy,
Live Well for its efforts to teach kids about the value of good nutrition.

“It’s phenomenal that they do offer a program like this,” said Brooks. “We have had opportunity to
partner with Tanner on a couple of other different occasions. They’ve always been super supportive to
our school system.”

She also commended Carrollton City Schools Nutritionist Dr. Linette Dodson and her team for the “phenomenal job” they’re doing of giving students balanced meals. She described the play as being
“icing on the cake.”

“[The play is] something that they can take home and share with their family,” said Brooks. “Every
student in this auditorium was still, quiet and attentive watching everything unfold. The fact that they
can walk away, tell you what they saw and explain to you the importance of good nutrition is huge.”

Kids who attend the play at school are given a set of five wristbands — each a different color. The
bracelets will remind them to eat a rainbow of fruits and vegetables every day. Each morning, they will
put the five bands on their left wrist. After eating a serving of fruit or vegetables, they move one band to their right wrist. By the end of the day, the goal is to have moved all five bands, showing that they ate a rainbow.

Free performances of “Eat a Rainbow” are available for schools throughout Carroll, Haralson and Heard
counties. To learn more about Get Healthy, Live Well, visit www.GetHealthyLiveWell.org or call 770.812.9871. 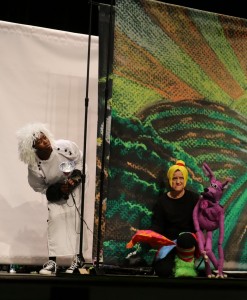