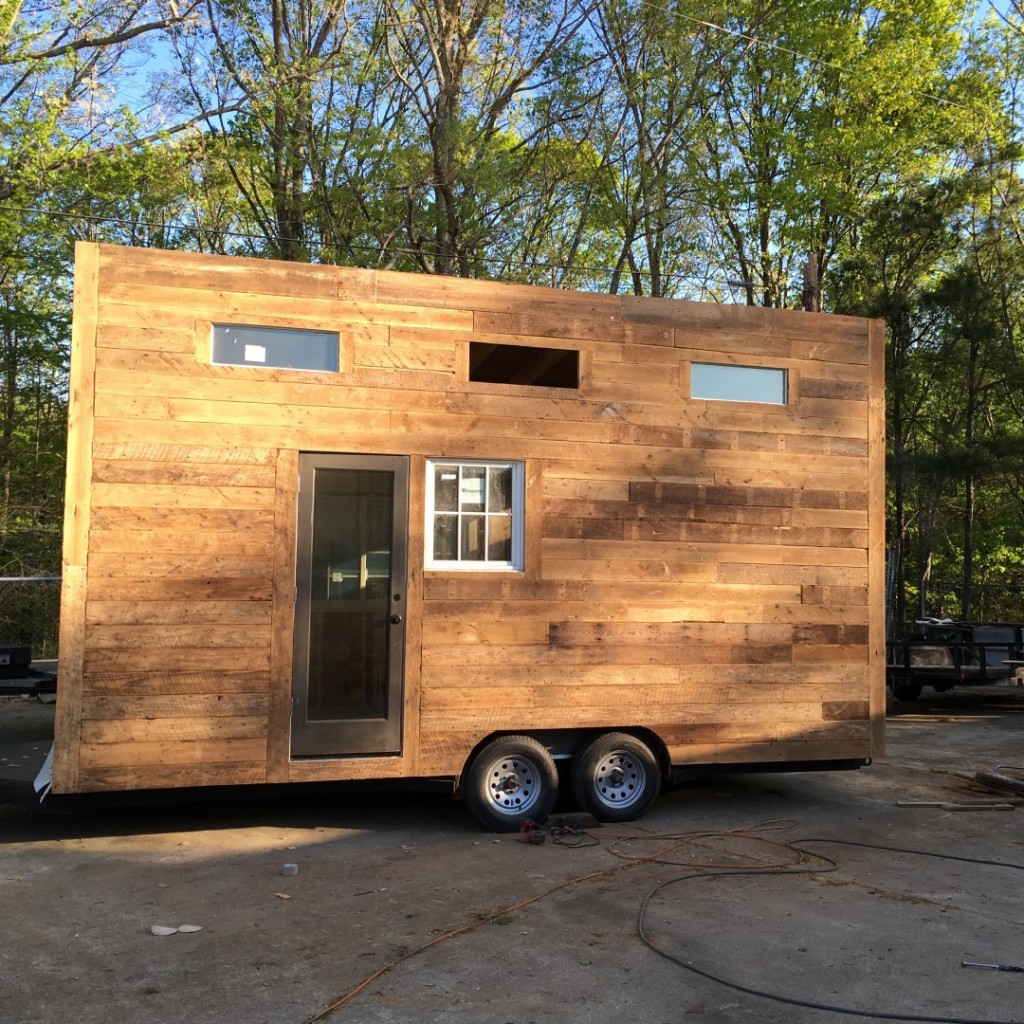 APRIL 5, 2016 – On May 10, Lamon Luther will give away a tiny house to launch its charitable foundation to provide housing for its homeless employees.

The socially conscious enterprise has been providing jobs for the homeless in West Atlanta since its inception in 2012 making custom, one-of-a-kind furniture pieces using new and reclaimed wood. Hiring its first employee, TC, who had been homeless for 15 years, taught entrepreneur and Lamon Luther founder, Brian Preston, how crucial job creation is for breaking the cycle of chronic homelessness.

Since its inception, Lamon Luther has provided more than 78,000 man hours of meaningful work. Today, the social enterprise has been hired to provide community tables for the new Mercedes-Benz Stadium and partners with one of the largest furniture retailers in the U.S., West Elm, which is owned by williams-sonoma, for a handmade line. The company is setting its sights on a different type of growth in 2016 and beyond: housing for its homeless employees and 100 new craftsmen.

“We believe that homeless people can add tremendous value to society,” said Preston. “Craftsmanship is an incredible tool to restore dignity and hope for those affected. In addition to making tables and other furniture pieces, we get asked to build tiny houses all the time. What better way to share our vision for housing for homeless than seeing the boom of the tiny house market and applying our unique skill and passion to a custom home giveaway?”

Instead of using popular crowdfunding techniques like Kickstarter or Indie-gogo, Preston and his team decided to launch a sweepstakes. From now until May 10th, residents of the United States can visit tinyhousegiveaway.co and enter to win a 20-foot, custom tiny house. Users can enter multiple times throughout the sweepstakes period by making a $20 donation. The tiny house is worth approximately $30,000. Click to Enter —> http://tinyhousegiveaway.co

“It dawned on us after seeing the success of Brother Moto give away a motorcycle last year to raise support for its expansion, that we could launch our foundation in a similar way,” said Preston. “We couldn’t be more excited for the enthusiastic response so far. But, we still have a long way to go.”

Lamon Luther Foundation, Inc., has set a goal to raise $500,000 for its launch. Not only will the funds provide affordable housing for

Lamon Luther employees, it will also create more work, help the company expand operations and purchase a permanent home. The company also has a goal to hire 100 deserving craftsmen by 2017.

According to the National Alliance to End Homelessness, approximately 564,708 people were homeless on a given night in the U.S. in 2015 and more than 75 percent were capable of work.

Companies like Lamon Luther are leveraging the free enterprise system to create social change for good. Visit lamonluther.com to find out more.

###
About Lamon Luther – The Man
Born in 1930 in the foothills of Randolph County, Alabama, Lamon Luther Wilson is a farmer, a mechanic and a carpenter. With his hands he provides for his family. During those days, working with your hands was a part of survival and economic stability. If the sun is up during the summer months, he is found in his garden. He shares his excess crops with his community, making sure everyone has the freshest produce. His hands are callused but you wouldn’t know it on Sunday behind his perfectly pressed suit. Lamon Luther is a rugged gentleman.
Lamon Luther, the company, was born in 2012 as a tribute to a dying generation of craftsmen. It employs those who have been directly affected by homelessness and addiction, aiming to restore hope and dignity to its workforce. Lamon Luther goods are made using 50 percent reclaimed wood, keeping hundreds of thousands of pounds of old houses, barns and pallets out of landfills. Its signature piece is the farm table. Many custom pieces are produced also, including community tables for the new Mercedes-Benz Stadium and a handmade line for one of the largest furniture retailers in the U.S., West Elm, which is owned by williams-sonoma.

Lamon Luther Foundation, Inc., provides resources to help those affected by homelessness and addiction with affordable housing, financial counseling, and treatment. Once rehabilitated, employees hired from Lamon Luther Foundation subsidize their income by paying a portion of their rent for a period until they have maintained a good paying history. The foundation will also help with basic housing needs, food, toiletries, clothing and resources to get them back on their feet. Each Lamon Luther employee is required to pay it forward, meaning a small percentage of their weekly pay will contribute to help future employees transitioning out of homelessness.