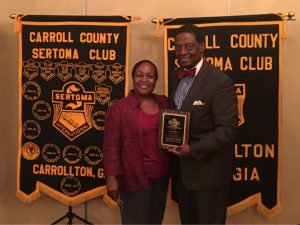 CARROLLTON, GA – Fred O’Neal has been honored by the Carroll County and Carrollton Evening Sertoma (Service To Mankind) Clubs and North Georgia District of Sertoma (Service To Mankind) International with the Service To Mankind Award for 2016. The two awards recognize local philanthropists for their works in the community and at large.
As the 2016 recipient of these awards, O’Neal has been a community leader for the past three decades in Health Care, Education, Economic Development, Chambers of Commerce and Government. Fred has served as a trustee for Tanner Health Systems, the University of West Georgia and West Georgia Technical College. He is also a former Chair for A-Day for West Georgia and charter member of the UWG Richards College of Business Board of Advisors.

“Fred is such an icon in this community that we sometimes take his involvement for granted,” said Charles Hodges, Past President for the Carroll County Sertoma Club. “Regardless of his quiet demeanor, when he is involved or whenever he speaks, people take notice. His wisdom carries a tremendous amount of weight in our community.”
Other areas in which O’Neal has served are the Community Foundation of West Georgia, The Salvation Army, Chatt-Flint Regional Development Authority, Kappa Alpha Psi Fraternity, Carroll County Emergency Shelter, Carroll County Education Collaborative and Boys and Girls Club of West Georgia. 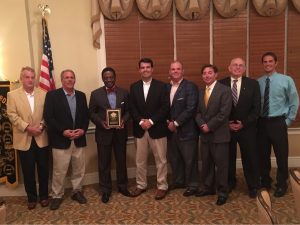 After receiving his B.B.A. in 1985 and his MBA in 1988 from the University of West Georgia, O’Neal began his career with Edward Jones as a financial adviser and is the longest tenured African-American adviser in the company’s 145-year history. His work has been featured in Fortune Magazine, Black Enterprise, Georgia Trend and On Wall Street.
Sertoma (Service to Mankind) was established in 1912 as the cooperative Club in Kansas City, Missouri. Now, Sertoma clubs can be found throughout the U.S., Canada and Mexico. Historically, the organization has focused on speech and hearing health problems, particularly in children, but has since adopted programs targeting drug abuse education and projects promoting freedom and democracy to school-aged children. Local Sertoma clubs also sponsor and support teen and collegiate clubs in area schools.